Republican Rep. Marjorie Taylor Greene is once again showing why the epithet ‘controversial’ is an apt one, as on Wednesday she aggressively confronted Democrat Rep. Alexandria Ocasio-Cortez as she exited the House chamber and threw some pretty wild accusations at the Representative for New York’s 14th congressional district.

None of which the youngest woman ever to serve in the United States Congress rose to as she showed that dignity and professionalism out trumps Trumpism.

The events, witnessed by two Washington Post reporters, saw Taylor Greene trying to get AOC’s attention as they both left the chamber. When AOC failed to stop walking and acknowledge the representative for Georgia’s 14th congressional district, this only seemed to infuriate her as she picked up her pace to confront AOC more loudly, and certainly more aggressively, shouting at her and asking why she supports Antifa, a loosely knit group of far-left activists, and Black Lives Matter, falsely labeling them “terrorist” groups.

She wasn’t quite done there as she continued shouting about how Ocasio-Cortez was failing to defend her “radical socialist” beliefs by declining to publicly debate the freshman from Georgia, telling her “You don’t care about the American people,” Greene shouted. “Why do you support terrorists and Antifa?”

The only response she garnered from her Democrat opponent was to see AOC throw her hands up in the air in an exasperated motion.

This confrontation caused the New York congresswoman’s office to call on leadership to ensure that Congress remains “a safe, civil place for all Members and staff,” and this wasn’t the first time Taylor Greene has caused security concerns for her Capitol Hill compatriots and this was not the first time she has aggressively confronted AOC.

Back in February 2019, when Taylor-Greene was a conservative activist, she posted a (since-deleted) Facebook Live video more akin to a bully at recess than a 45 year old mother of three.

The video shows Taylor-Greene and three male companions taunting the congresswoman through her office letterbox, telling the lawmaker to “get rid of your diaper” and come outside.

She continued to criticize Ocasio-Cortez’s “socialist” policies by saying, “You’re bringing God’s judgment on our country and I am against it, as well as my friends.

” Taylor-Greene’s behavior and rhetoric have seen her confront other Democrat lawmakers, but this latest incident has seen Speaker Nancy Pelosi call for the House Ethics Committee to get involved, calling the Georgia Republican’s behavior a “verbal assault.”

It is not just her Democrat opponents that have expressed concern about her erratic and confrontational behavior, she has become an issue for GOP leaders as well after fellow Republicans started to complain about her attempts to delay routine floor actions.

Then House Minority Leader Kevin McCarthy spoke with MTG and she did try to walk back some of her more controversial statements in a speech on the House floor, but zero punitive actions were taken to curb her bizarre behavior.

This is just another incident in a laundry list of truly unhinged incidents since before and after she was elected to Congress in November 2020 and sworn into office on January 3, 2021.

Greene has made a number of incendiary and false statements in recent years, statements that include that black people “are held slaves to the Democratic Party,” that Reps. Ilhan Omar (D-Minn.) and Rashida Tlaib (D-Mich.), the first two Muslim women elected to Congress, represented “an Islamic invasion into our government offices,” and that Jewish billionaire investor and philanthropist George Soros collaborated with Nazis.

She seems to believe a plethora of conspiracy theories and has no issue spouting them on her social media accounts.

They include, but are by no means limited to, 9/11 being an ‘inside job’, forest fires being caused by the Rothschild’s ‘Jewish space laser’, the shootings at Parkland, Sandy Hook, and Las Vegas being staged ‘false flag’ events designed to take your guns away, the most pervasive conspiracy theory she has championed is the QAnon conspiracy theory.

This convoluted, not crazy at all, conspiracy theory believes that Donald Trump is secretly fighting a worldwide child-sex-slavery ring run by the ‘elites’ that was supposed to culminate in the mass arrest of his political opposition before Biden could be sworn in on January 6. Although none of that actually happened, it has been cited as one of the contributing factors that led to the Capitol Hill insurrection.

Apart from anything else, if Trump was leading such a fight, it is highly doubtful he wouldn’t have told everyone within a 2000 mile radius that this is exactly what he was doing and how great he was.

But Ocasio-Cortez is a different type of politician and one who, as the common phrase goes, ‘doesn’t suffer fools gladly,’ so when asked about the confrontation she didn’t mince her words, saying “This is a woman that’s deeply unwell. And clearly needs help. And her kind of fixation has lasted for several years now.

At this point, I think the depth has raised concerns for other members, as well. And so, you know, I think that this is an assessment that needs to be made by the proper professional.”

The hard shift to the right the Republican’s have taken in recent years means that politicians like Marjorie Taylor Greene have a platform to say all manner of things, and there will be an audience for such rhetoric, but the question has to be asked, do we really want someone who spouts wild and wholly discredited and debunked conspiracy theories and someone who debases, not debates, her political opponents, to represent American democracy on the world stage? The fact that this is even a question to be asked says everything about the state our country is currently in. 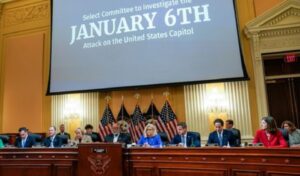