This Tuesday, one of the greatest tragedies of the year has shaken our country once again when 8 people were murdered in a series of three-spa shootings near Atlanta.

The issue has been putting more and more public figures, as well as Asian American communities on the edge as our nation is fighting against racism more than ever.

The vice president, who is also of South Asian descent, quickly released the following statement:

“It is tragic. Our country, the President and I and all of us, we grieve for the loss. Our prayers are extended to the families of those who have been killed, and it speaks to a larger issue, which is the issue of violence in our country and what we must do to never tolerate it and to always speak out against it.”

Two locals living near one of the massage parlors that was attacked on Tuesday night reported that it was unusually quiet that night just before the tragedy.

And it’s unusually quiet now as many of us show our support towards the Asian American community. During the shootings, six of the eight victims shot fatally were women of Asian descent.

Asian communities have been receiving plenty of racist remarks and acts over the past year mainly due to the origin of the SARS-CoV-2 virus. Former President Donald Trump and his administration have also played an important role in sparking conflict.

Ever since the first COVID-19 cases appeared in our country, Trump has referred to the disease as ‘the Chinese virus’ claiming that it would be China’s fault for the pandemic.

This theory has been increasing in popularity among racist groups who started targeting Asian communities.

However, when it comes to the Atlanta massage parlor shootings, officials haven’t declared precisely that the attacks were targeted at Asians. When police officers arrived at the first scene of the shootings, they reported the event as a ‘robbery in progress’ – although that’s not the final answer either. 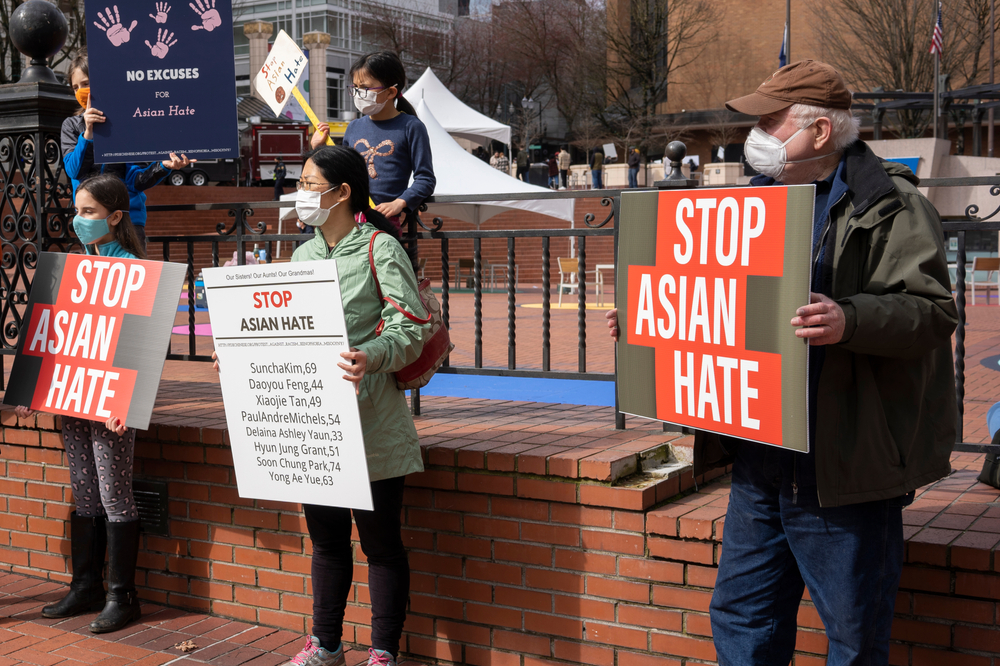 Sadly, vice president Kamala Harris is no stranger to racism herself. Over the past two decades of her political career, she has been targeted by racist from all social classes for three main reasons: she is a woman of color from Asian descent.

One of the worst offenses she has probably receives comes from former president Donald Trump. Although it’s unsurprising that Trump would offend a woman of color given his past public speeches targeted at these groups, referring to Kamala Harris as ‘this monster’ seemed extreme even for him.

However, the remark is just one of the many despicable words Trump used to describe the current vice president; other adjectives used include ‘aggressive,’ ‘disrespectful,’ ‘mean’ or ‘angry.’

And just like him, millions of other Americans are still trapped in a racial mindset that still affects people’s rights to this day.

The Atlanta shooting brings two sides of the same coin to our attention: on one side, there’s the racism targeting minorities in our country. On the other side, we have the empathy, correctitude and respect that police officials are showing towards the main suspect, a 21-year-old white male.

This event is only making more and more people wonder ‘had the suspect been part of a racial minority group, would he have been treated the same way? Would he have been accused of racial attacks or robbery sooner or easier?’

These question surface shortly after the tragic deaths of people of color such as Breonna Taylor, who was shot fatally after police officers mistakenly broke into her house, or George Floyd, a man suffocated in broad daylight when a police officer kneeled over his head for eight minutes straight.

Not only had these people been denied the right to even speak for themselves, but the police officers involved in such terrible crimes are still walking down the streets free.

George Floyd could only say ‘I can’t breathe.’

Now, everybody is trying to protect and support Asian communities fearing that the Atlanta shootings may be the results of racial injustice (again). Kamala Harris and president Joe Biden are clearly involved in this tragic event, but is that enough to change a nation’s mindset inherited from so many former generations?

Only time will tell.

PrevPreviousStimulus Child Tax Credit FAQ: What You Should Know
Next10 US Presidents Who Hid Really Strange HobbiesNext