When Joe Biden was sworn in as 46th president of the United States on January 20, 2021, he inherited a country in an unprecedented state of chaos with the ongoing coronavirus pandemic, a rise in racial tensions, increasing police brutality, a previous administration claiming (and still claiming today) the widely debunked conspiracy theory of widespread voter fraud, and a country so polarized that the divide between left and right has grown into a chasm as wide and as deep as the Grand Canyon.

As he nears his 100th day in office, this has, in modern times, been historically a good time to gauge the performance of the sitting president. As far as approval rating goes, Biden is sporting the steadiest approval rating on record for a president through nearly 100 days in office. Although sitting around an impressive average of 54%, this is not a historically strong number as many post war presidents have held higher ratings at the same point in their presidency.

What makes the percentage equally as impressive as its steadiness is the fact that those numbers have stayed consistent ever since Biden entered the White House. So, why is the first 100 days considered so important, and what events helped shape the first 100 days of previous presidents? Here we are going to look into a few facts and numbers about those crucial first steps into those burgeoning administrations.

When did the first 100 days become a benchmark?

The concept of being judged on 100 days is believed to be rooted in French history, not American. The “Cent Jours” (Hundred Days) refers to the period of 1815 between Napoleon Bonaparte’s return to Paris from exile on the island of Elba and his final defeat at the Battle of Waterloo at the hands of the Anglo-allied army led by the Duke of Wellington, ending the Napoleonic Wars.

It wasn’t until Franklin D. Roosevelt took office in 1933 that the first 100-day standard became something to emulate for any subsequent commander in chief. Inheriting the worst depression in our nation’s history, with a quarter of the workforce unemployed and two million citizens homeless, the near collapse of the farming and industrial sectors, and banks closing left, right, and center, Roosevelt had to take decisive actions, which is exactly what he did.

When did the first 100 days become a benchmark? (cont.)

He began rolling out major programs as part of his ‘New Deal’ initiative which included passing 15 major bills designed to combat the effects of the Great Depression as well as 76 laws to help revive the economy through various public works projects within his first 100 days of office. FDR’s speed, resolve, and productivity in these first 100 days would not only make him extremely popular but would also become the standard by which all future presidents would be judged.

Previous presidents have had their fair share of trials and tribulations in their first 100 days, next we take a look at a few of the more impactful ones.

JFK and the Bay of Pigs

The first 100 days of the John F. Kennedy presidency saw more than just one world changing event take place. Just 87 days into his presidency, with the advice of the U.S. State Department and the CIA, Kennedy approved the ill-fated invasion of Cuba which would become known as the ‘Bay of Pigs’.

After the young Cuban nationalist named Fidel Castro overthrew the American backed president General Fulgencio Batista on January 1, 1959, American officials became increasingly more nervous about having a communist state about 100 miles from the United States. For the next two years, both the U.S. State Department and the CIA had plotted to have Castro removed.

JFK and the Bay of Pigs (cont.)

This feeling was only exacerbated when in May 1960, Castro established diplomatic relations with our Cold War opponent the Soviet Union. Then-president Eisenhower authorized the CIA to recruit 1,400 Cuban exiles living in Miami and begin training them to overthrow Castro. By the time Kennedy was sworn in, these men were primed and ready to invade Cuba, and what convinced him to authorize such an invasion was that Kennedy believed that removing Castro, it would show Russia, China, and skeptical Americans that he was serious about winning the Cold War.

However, the failed invasion would have entirely the opposite effect as on April 17, 1961, the main invasion force landed on the beach at Playa Girón in the Bay of Pigs and within just three days, they were defeated by the Cuban Revolutionary Armed Forces. This would only bolster support for Castro as a national hero and push him further towards the Soviet Union, setting the stage for the Cuban Missile Crisis just a year later.

This wouldn’t be the only Soviet Union related crisis that Kennedy would face, as in the same month as the Bay of Pigs debacle, 5 days earlier, in fact, he had to contend with the fact the Russians had just achieved a historical first with cosmonaut Yuri Alekseyevich Gagarin becoming the first human being to travel into space, giving them a considerable lead in the ongoing “space race”.

When Ford automatically assumed the presidency after the shock resignation of Richard M. Nixon due to the Watergate scandal, his initial approval rating was relatively high at 71% on August 9, 1974, despite the unprecedented circumstances that saw him take office. However, those numbers would quickly take a nosedive after Ford controversially decided to pardon Nixon for any crimes he may have committed as president.

This decision flew directly in the face of millions of Americans who wanted to see Nixon brought to justice for his involvement in the Watergate scandal. Many people believed that this was a pre-arranged agreement before Ford entered the Oval Office but Ford would insist that he took this difficult decision as the nation needed to heal and move on from the ordeal of Watergate.

The Reagan Presidency Starts With a Bang

Literally minutes after the first inauguration of Ronald Reagan as the 40th president of the United States on Tuesday, January 20, 1981, fifty-two American diplomats and citizens who had been held hostage by a group of militarized Iranian college students belonging to the Muslim Student Followers of the Imam’s Line, who supported the Iranian Revolution, were released after being held for 444 days.

The timing of the release of the hostages gave rise to the October Surprise conspiracy theory. The theory refers to an alleged plot to influence the outcome of the 1980 United States presidential election, the allegation being that representatives of Reagan’s presidential campaign had conspired with Iran to delay the release until after the election to thwart President Jimmy Carter from pulling off an “October surprise.”

The Reagan Presidency Starts With a Bang (cont.)

To further bolster the claim of backroom dealing, many point to the fact that after Reagan was sworn in, his administration supplied Iran with weapons via Israel and unblocked Iranian government monetary assets in U.S. banks. However, both houses of the United States Congress would hold separate inquiries into the incident but concluded that there was insufficient evidence to prop up this claim.

This wasn’t the only major event to take place for Reagan in his first 100 days as, sixty-nine days into his administration on March 30, 1981, his presidency would almost come to an abrupt and tragic end when an assassination attempt was made by John Hinckley Jr. who bizarrely believed that in shooting the president, he would earn the affection of the Oscar-winning actress he was stalking, Jodie Foster. Unsurprisingly, it didn’t.

The Reagan Presidency Starts With a Bang (cont.)

The attack would take place as he was returning to his limousine after a speaking engagement at the Washington Hilton Hotel when Hinckley rapidly fired a Röhm RG-14 .22 LR blue steel revolver six times in 1.7 seconds. The first shot striking then press secretary James Brady in the head, leaving him partially paralyzed for the rest of his life. The following four shots would wound Secret Service agent Timothy McCarthy and District of Columbia policeman Thomas Delahanty.

The sixth and final shot would ricochet off the armored side of the limousine entering in the left underarm of the president, grazing his rib and lodging in his lung causing serious internal bleeding and narrowly missing his heart. Despite requiring emergency surgery to remove the bullet, the president would amazingly recover and be released on April 11 where he immediately went back to work.

Much like FDR, who became the gold standard for the first 100 days, when Barrack Obama was sworn in as the 44th president of the United States on January 20, 2009, he inherited a nation in the grip of a major financial crisis. On just his 29th day sitting behind the Resolute Desk he managed to get Congress to sign a $787 million stimulus package, the American Recovery and Reinvestment Act, bailed out the struggling auto industry and Wall Street, and gave working families a tax cut.

Obama didn’t stop there as even before he convinced Congress to pass his stimulus bill, he had already signed the Lilly Ledbetter Fair Pay Act giving legal protection in the fight for equal pay for women just nine days into his term. He was also able to sign into law the expanded State Children’s Health Insurance Program (S-CHIP) which would put Congress on record as dedicated to dealing with major health care reform legislation in 2009.

The decisions Obama took would see him end his first 100 days as the president with the fourth highest approval rating (63%) since Gallup began tracking presidential approval ratings of the first quarters since Eisenhower in 1953.

The Best and Worst Approval Ratings

Although President Reagan’s final approval rating didn’t hit the giddy heights of 74%, he would end his first 100 days at 68%. However, what would make those numbers more impressive is the fact that they jumped even more at the outset of his administration, shooting from 51% to the final 68%.

Finally, the president who comes in dead last, which will come as little surprise to many, is our last commander in chief Donald Trump, who ended his first 100 days at 40%. It wouldn’t get any better for the Donald as not only did his tenure as president never see an approval rating above 50%, the only president not to register a 50% job approval rating at any point in his presidency, but it would end on a paltry 34%. 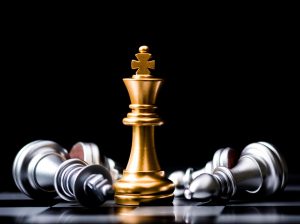