The history of American rebellions started even before the American Revolution, which, of course, changed human history. But it got more potent when the revolution ended. The American Revolution began in 1765, but it became even more frightening in 1775 when the British soldiers opened fire in Massachusetts at Concord and Lexington.

The British occupied the region from north of Florida to the Mississippi river of North America, and many colonists broke from England and settled in America. Thus, the colonists settled in colonies in North America.

The colonists wanted to escape the war, famine, diseases, poverty, and other troubles. The government wanted the colonists to pay taxes, and that did not seem fair to the colonists. So, they started rebellions across the country.

The uprisings did not end after the revolutionary war ended in America, but rather the American citizens used the power of protests and revolts to get what they want or to stand against something they find unjust. In addition to the colonial rebellions, America has faced many distressing situations where violence had impacted everyone in the nation.

Below are the top ten dreadful uprisings in American history:

Wilmington insurrection 1898, also known as the Wilmington race riot of 1898, was a politically motivated rebellion by white Americans against the leading African Americans. This violence started on November 10 where whites wanted to dominate politics in the southern states of America.

It all happened in the largest metropolis of that time, North Carolina, specifically the city of Wilmington. Democrats were dominating in North Carolina due to nationwide elections, but the town of Wilmington was in the hands of Republicans because of the majority of African Americans. Alfred Moore Waddell was a politician and white supremacist and led this violence against African Americans.

After The American Revolution, America had to face a severe financial crisis, and the economic conditions were highly dreadful, especially in Massachusetts. Farmers were made to pay high taxes, and they were losing their belongings to debt collectors. These farmers were soldiers from the revolutionary war, and they were forced to start the rebellion because of severe poverty and seizing of property.

The rebels began violent attacks on government properties and courthouses to get their rights. This rebellion was named after the farmer and ex-soldier of the war of the revolution, named Daniel Shays. The Shay’s Rebellion was confronted by the military, which resulted in the death of four rebels, and twenty others were injured severely.

Bacon carried out the rebellion against the government of Virginia over high taxes, unfair prices of tobacco, and particular advantages given to the people who were close to Berkely. Bacon wanted to get rid of Berkley. So, bacon and his men burned down Jamestown to its ground in 1676. Bacon died one month after the uprising due to fever, and the rebellion broke up.

The planters started to replace their servants with the black slaves, seen as a cruel foundation of labor forces in American colonies.

The whiskey rebellion in America occurred because of the tax that the government implied on all distilled spirits. Still, the incident got its name as the whiskey rebellion due to the popularity of whiskey among all other drinks. The government implied the tax on a domestic product (distilled spirits) for the first time, and the distillers got angry.

In its defense, the government claimed that it was the right thing to do in the light of the new constitution. This tension between the government and the distillers continued to grow until 5,000 men attacked the tax office of Pennsylvania in 1794. President George Washington sent a military army of 13,000 men to stop this rebellion, but the rebels dispersed as soon as the army reached the site.

New York City faced an extensive insurrection right after ten days of union victory at the Gettysburg battle. The Riot began on the morning of July in 1863. Hundreds of citizens came out to protest the federal draft lottery in New York City. The Civil war was going on in the United States, and it had divided New York City.

Many citizens witnessed the violation of the conscription law (which allowed the wealthy whites to get out of serving for $300 and excluded the black people) in New York. This violation of law and the draft lottery led to a great rebellion in the city. The protestors crowded the draft office and attacked the police.

The Battle of Athens broke out between veterans and the local government in Tennessee. The citizens led the rebellion against the sheriff and legislature of the jail named Paul Cantrell. The sheriff used to force people to vote for him through ballot stuffing. This corruption stayed hidden until 1945, but the people had had enough when they returned from World War Two.

The GI’s got irritated at this corrupt behavior of Cantrell and formed their political party to kick out the sheriff. After people cast the votes, the sheriff ran off with ballot boxes and hid with his deputies in the jailhouse. It infuriated the GIs, and they attacked the jailhouse where several men got killed, and others were wounded.

In the end, GIs started to use dynamite to disintegrate the jailhouse, and the sheriff was forced to surrender.

In 1921, the most prominent labor riot happened in America, in the winding hills of Southwest Virginia. The region was enriched with coal and controlled by coal tycoons at that time. The tycoons hired violent private detectives to harass the workers in the coal mines, who were trying to join the Trade Union.

The Riot was upraised when a lawman of Pro-Union Sid Hatfield was assassinated in August 1921. After that, 15,000 miners and many veterans of World War One organized themselves and stood against the coal tycoons.

A force of 3,000 men, mostly the miners and the veterans, approached the Blaire mountains situated in logan county, where they fought with a strength of almost 3,000 men led by an anti-union sheriff, Don Chaffin. Chafin’s force attacked Miners with several machine guns, Rifles, Explosives, and Tear gas.

The Battle continued for many days until the federal troops came by and forced the poor miners to surrender or return to their city. Their firing killed a maximum of 100 men and injured more than 1 million miners in this Battle.

Stonewall inn, situated in Greenwich Village, New York City, was a gay nightclub. The police raided the bar and started to arrest the patrons in the late night of June 28, 1969. The officer hit a woman on the head while forcing her into the police van. She screamed for help, and hundreds of people started to attack the police in response.

They threw bottles, coins, stones, and other objects at the police. This Riot resulted in the first movement for gay rights in New York City. Many organizations raised their voice by setting campaigns for gay rights.

The Confederacy’s population suffered severely in the third year of the civil war. Due to the increased inflation and insufficient food supply, many southern cities of the Confederacy started revolts. This Bread Riot is the largest in the Capital of Richmond, Virginia.

In 1863, a group of armed and starved women requested to speak to the governor, John Letcher. When he did not show any concern, the armed force moved toward the city’s main town and raided the supply carts and warehouses for food.

The rioters increased when hundreds of men and women joined the Riot and stood for the food while shouting “bread or blood” on the streets. They marched the private supply houses and took food, jewelry, clothes, and other valuable utilities with them. The Riot was ended when the public guards of the city threatened them.

After that, the president tossed the coin to the crowd and pleaded, “This is all I have.” The public guards arrested 60 members of the riots. The government placed Artillery pieces to avoid future uprisings in the capital’s business district as a warning.

The green corn rebellion was an armed uprising by the resident farmers in Oklahoma on august two and three, 1917. The farmers were a part of the socialist party, and they had faced the great war in Europe. They found that the war gave benefits to the rich people only.

Furthermore, the federal government passed the draft, and Oklahoma’s government forced the draft registration that was expected to occur on June 5. The consequences of the great war in Europe and the draft made the tenant farmers furious, and it led to the green corn rebellion in the city.

In this rebellion, almost 250 rebels were arrested by the military, and some were sentenced to ten years of imprisonment. 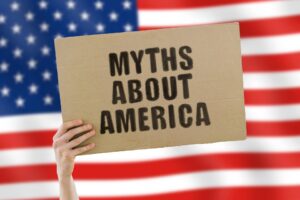